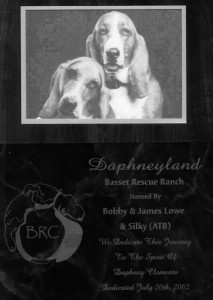 Meet the original Daphney – namesake of DaphneyLand – on the right. That’s Penelope on the left. Both hounds were owned by Ron and Tami Clements. Daphney went to the Bridge WAY too early from lymphoma – but her legacy lives on.

It’s the dream of every rescue organization – a home base – a place to care for your bassets and get them ready for their forever homes, hold fundraisers and adoption events. In 2002, Basset Rescue was foster home based and had more hounds than foster homes which resulted in close to $5000/month in boarding and kenneling costs. The dogs constantly had medical issues and behavioral issues because of inadequate supervision and poor conditions. Many were returned by adoptive homes for these reasons.

Rescue decided to act on “The Dream,” as they called it, and met to discuss how to achieve it. Tami Clements, one of the BRC Board members, was on her way home from that meeting when she spotted an old ad for a kennel that was for sale in Acton. A quick phone call indicated that the property had fallen out of escrow that very morning. It was definitely one of those “meant to be” moments! Tami and her husband, Ron, stepped up to the plate and purchased the property then leased it back to the rescue.

A fundraiser was held to name the property with the Clements’ stipulating that the name needed to honor their first basset, Daphney. Donors submitted a name with their donation and Ron Clements was given just the list of names entered to choose from without the name of the donors. Dawn’s grandmother had sent in a $20 donation and told Dawn to pick a name and submit it with her donation. Dawn chose “Daphneyland” to submit and that was the name that the Clements chose. The name “Daphneyland” was unveiled at the grand opening celebration on July 20, 2002. In 2005, Daphneyland was sold and Dawn Smith stayed on to run the organization and manage the property, now officially known as Basset Rescue Network, Inc. at Daphneyland.

The only basset rescue specific rehabilitation center in the world. Daphneyland, the Basset Rescue Ranch came to be all because of one little puppy named Daphney that claimed the Clements heart and sparked their generosity one day in 2002. The ongoing generosity of thousands of donors, volunteers and adopters since then – and the spirit of a Basset Hound named Daphney – has made it possible for thousands of Basset Hounds lives to be saved.